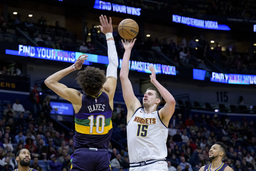 NEW ORLEANS (AP) Nikola Jokic said he could still feel a slight difference between the injured left hamstring that sidelined him for two games and his healthy one when he returned to Denver's lineup.

Not that it stopped him from notching his 15th triple-double of the season, or hindered his ability to produce in the clutch.

Jokic capped a 25-point, 11-rebound, 10-assist performance with a go-ahead floater in the paint with 16.9 seconds left, and the Nuggets escaped with a 99-98 victory over the undermanned Pelicans on Tuesday night.

Jokic said his lingering hamstring tightness is "not something major. So, hopefully it's going to be good."

Jokic sneaked into the paint for his winning shot after two defenders gravitated to Nuggets guard Jamal Murray, who then passed to Denver's 7-foot super star about 7 feet in front of the basket.

Murray scored 25 points for the Nuggets, who led for nearly the entire game and by as many as 19 points before New Orleans stormed back in the fourth quarter to take its only lead of the second half at 98-97 with 36.9 seconds left.

After Jokic put Denver back in front, the Pelicans had three shots to win it before losing their fifth straight.

McCollum's missed turnaround was rebounded by Pelicans forward Herb Jones, whose putback was blocked out of bounds by Bruce Brown.

After a timeout, the Pelicans got the ball to McCollum for a corner 3 that clanged off the rim, leaving him 0 for 8 from deep on an otherwise productive, 20-point night.

"CJ got open, got a clean look at it," Pelicans coach Willie Green said. "Just didn't go down."

Trailing 79-63 with 4:40 left in the third quarter, the Pelicans surged back with the help of 6-foot point guard Jose Alvarado, who scored 14 of his 17 points in the last 13 minutes with an array of crowd-pleasing driving floaters and layups.

"Alvarado was just living in the paint," Malone said. "There were definitely some breakdowns there."

Other than that, Malone was pleased with Denver's defense, particularly beyond the 3-point line, where the Pelicans made just five of 26 shots.

"To hold a team to 98 points in today's NBA, that doesn't happen very often," Malone said. "To win a game by one point on the road against a very desperate team, we'll take it."

Jokic wound up playing 36 minutes, hitting 11 of 14 shots, including two from deep.

He scored 11 points in the first quarter. Denver's lead grew to 15 early in the second quarter, thanks to a 13-0 run during which Murray hit a 3, a turnaround fade and a driving layup.

Murray wound up scoring 16 points in the second quarter, including an alley-oop jam of Kentavious Caldwell-Pope's fast-break lob after his interception of McCollum's pass.

Nuggets: Brown and Aaron Gordon each scored 11 points. ... Malone was coaching for the first time since testing positive for COVID-19, which caused him to miss Denver's previous four games. Malone said he spent most of his absence secluded in his basement. "It was just me, a couch, a TV, and, you know, it was like spartan-type living," Malone said. ... Michael Porter Jr. remained away from the club while tending to the affairs of his brother, Coban, a Denver University basketball player who's been charged with vehicular manslaughter in connection with a recent two-vehicle crash that killed a 42-year-old woman. "I told him to take as much time as he needs," Malone said ... Bones Hyland also was out with a finger sprain on his left hand.

Nuggets: At Milwaukee on Wednesday night.

© 2023 by STATS PERFORM.
Any commercial use or distribution without the express written consent of STATS PERFORM is strictly prohibited.