Leaning on key 'moments,' Bucks aim to close out Celtics in Game 6 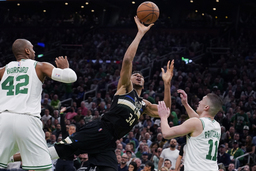 The Milwaukee Bucks will get an opportunity on their home floor to close out the second-seeded Boston Celtics when the tightly contested best-of-seven Eastern Conference semifinal series continues Friday night.

The defending NBA champions used last-second heroics from Bobby Portis and Jrue Holiday, on top of a 40-point effort from Giannis Antetokounmpo, to pull out a 110-107 Game 5 win at Boston on Wednesday to take a 3-2 series lead.

With the teams having alternated wins and losses through five games, the scene shifts back to Milwaukee, where the Celtics were last seen evening the series for a second time with a 116-108 victory.

Even in losing three of five games, the Celtics have outscored the Bucks by four points and have averaged a 15.5-point margin of victory. But it's been third-seeded Milwaukee that's walked away with two- and three-point triumphs in the series' two tightest games in Game 3 and 5, respectively.

Most of those moments in Game 5 belonged to Antetokounmpo, whose 27 shots included a critical 3-pointer with 1:40 to go and Milwaukee down by six. He was fouled on what would have been his 28th attempt, setting up the two free throws that later put the Bucks ahead -- one that he made and the other that Portis followed in.

The Celtics have run different players at the two-time league MVP, including Grant Williams, Al Horford and Jaylen Brown.

While neither Antetokounmpo nor Brown, who had 26 points Wednesday, appear to have been physically affected by the battle, Williams and Horford showed some wear and tear at the offensive end in Game 5, combining for eight points on 4-for-10 shooting in a total of 71 1/2 minutes.

Without injured big man Robert Williams, who has missed the last two games with swelling in his surgically repaired left knee, the Celtics have been limited in their defensive options against the 6-foot-11 Bucks star. Williams will be a game-time decision for Game 6.

The Celtics blamed only themselves, not Williams' injury, for their failure to hold onto a 14-point lead on their home court Wednesday.

"We made it tougher on ourselves now," Celtics coach Ime Udoka said after the loss. "It'll make it sweeter when we bounce back, but we gave up a golden opportunity."

The visiting team has now won three of the five games in the series. The Bucks realize that home court guarantees nothing in Game 6.

"At the end of the day, can't get too high, can't get too low," Antetokounmpo said. "We were up seven or 10 the previous game. We lost it. They were up. They lost this one.

"It's great to go back home and feel good about ourselves, but the job is not done."

© 2022 by STATS PERFORM.
Any commercial use or distribution without the express written consent of STATS PERFORM is strictly prohibited.